I attended the UN World Report on Disability Symposium hosted by the University of Sydney from December 2-8, 2011. Actually I wasn’t there to participate, but rather to interpret for the two very devoted and hardworking deaf ladies I ever knew, Maffy Gaya and Weng Rivera. They are the officials of Filipino Deaf Women’s Health and Crisis Center. We were all sponsored by Australian Aid (AusAid) including interpreting service fee courtesy of Ms. Badette Cariaga.

The two-day event would be very tiring for me as a lone interpreter so I was accompanied by the Dean Nicky Perez of DLS-College of St. Benilde School for Deaf Education and Applied Studies. Ms. Badette told us that somebody commented about why the dean of a college and a director of another college would accept a position of just an “interpreter”. But we just shrugged off the issue. For us, interpreting is an exciting yet rewarding work. Besides, we don’t want to pass an opportunity in going to Australia for free! 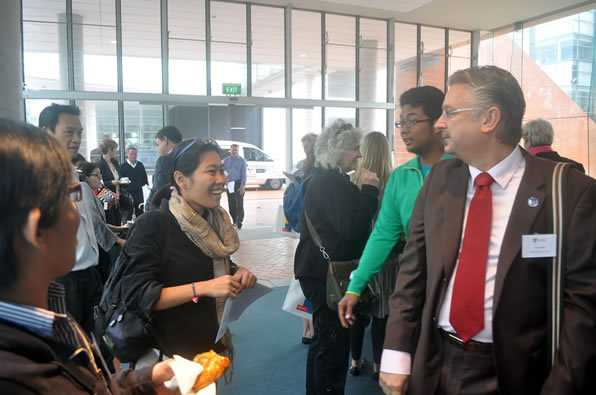 Actually we were only tasked to interpret for Maffy and Weng. Newly elected World Federation of the Deaf President Colin Allen was invited to attend since it was held in his country. He also brought with him two interpreters from Australian Sign Language Interpreters Association (ASLIA). Nicky and I was referred to AusAid by ASLIA’s Philippine counterpart, the newly formed Philippine National Association of Sign Language Interpreters (PNASLI). But since the two of us are signing alternately, we were sort of like, also interpreting for Colin. 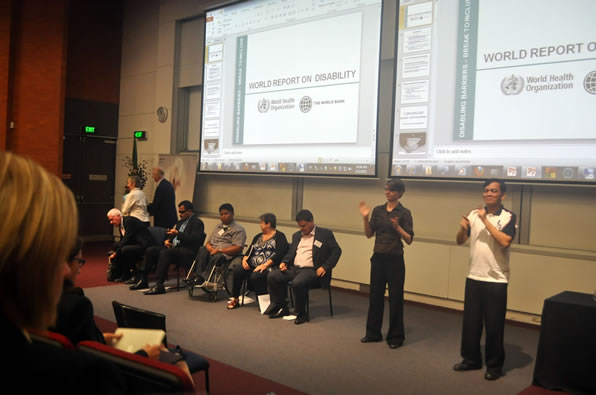 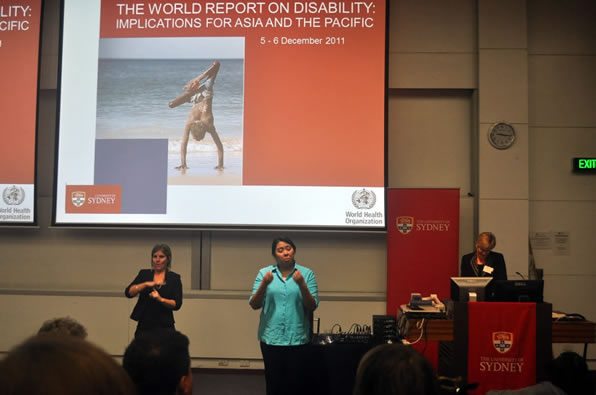 At first, Dean Nicky and I were having butterflies in our stomachs because of two things; one was interpreting in front of an international symposium for the first time, and the other was interpreting for the President of the WFD! Pressures, pressures! What if our signs were not clear? What if we experience a sudden mental block? Interpreting for “The President” is a big challenge while at the same time a truly great honor for us.

After we were properly introduced (Maffy and Weng were already familiar with Colin since they already met in other international conferences), we started to work. Nicky opened the signing, then me. We followed on queue with ASLIA interpreters in switching places after every speaker and not every 20 minutes since each lecturer has a different length of time. Imagine looking at two distinct signs in front of them; Filipino Sign Language/American Sign Language and Australian Sign Language. Once in a while, Colin glanced at us smiling and nodding. We were both relieved. He was truly a remarkable and accommodating person. 🙂

Later, the organizers congratulated us for doing a swell yet tiring job of interpreting for the whole eight hours straight with only a few breaks. After that, we enjoyed the tour of the beautiful city of Sydney including a trip to Sydney Harbour and the Sydney Opera House. The city was truly amazing. And since we are already there, we were able to contact the Deaf Society of New South Wales and paid them a visit together with meeting with ASLIA officials.

Although the experience was awesome, I observed some interpreting issues that I raised with ASLIA Representative Sheena Walters. One of the issue was if the deaf person is not looking at the interpreter, would you continue signing or not? But I will reserve that story on my next blog, including the observations I raised.

Thank you very much to AusAid for the wonderful opportunity, WFD President Colin Allen for bearing with us, ASLIA for your generous support and of course the City of Sydney for the very exciting travel. 🙂