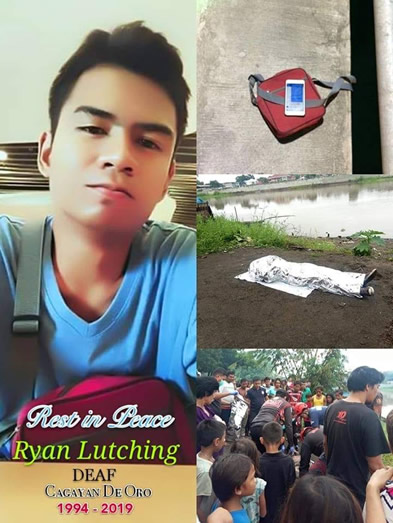 A couple of days ago (January 20), the entire Filipino Deaf Community (as shown in their Facebook reactions) was shocked when a twenty-five year old deaf committed suicide by jumping off JR Borja Bridge in Cagayan De Oro City at around 9:55pm of January 19. Ryan C. Lutching, a former student of La Salle University – School for the Deaf in Ozamiz City and an active member of a deaf group in Mindanao, left his smartphone on top of his red bag turned on showing his suicide note before killing himself.

Brian Maglangit Mutas first posted the incident on his Facebook account. In his photos, bystanders and onlookers were looking at the bridge where it happened. I guess no one was there to save him during that time. Brian also took pictures of the messages that Ryan posted on his cellphone. Ryan’s body was found two days later (January 21) washed away at Macabalan river shore.

Messages on his phone indicated that Ryan was apparently talking to his “Bro” or brother and that he is ending his life because he is undergoing depression. He said that he misses his father who already died and he felt alone because his relatives and other family members never talk to him. My deaf friends told me that only his father knows how to sign. Ryan also mentioned that he got jealous of his male friends who already have relationships and they even teased him for being single.

Strangely, Ryan posted this cryptic image on the same exact date he died one year ago. Some of my deaf friends informed me that it was his father who died on that day.

Earlier this month, Bryan Velasco, a Filipino rock band Razorback’s drummer fell to his death from a condominium. He was 41 years old, and it was an apparent suicide. Velasco jumped from the 34th floor and landed on a canopy. There were no other injuries. The drummer went live on Facebook and filmed his death Wednesday morning.

What is depression?
According to the American Psychiatric Association, depression is…

a common and serious medical illness that negatively affects how you feel, the way you think and how you act. Fortunately, it is also treatable. Depression causes feelings of sadness and/or a loss of interest in activities once enjoyed.

A few decades ago, depression is commonly associated with being sad and grieving from say the death of a loved one, losing a job or ending a relationship. But now, scientists have found out that it is a medical condition that distinguishes it from just “being sad”.

Symptoms of a Person undergoing Depression

You or your loved ones show signs of depression if they are:

What about depression and deafness?

One reason why I made a post about this is to document the incident because, until today, mainstream news media hasn’t picked it up. The other is to inform everyone that depression is a serious condition that affects everyone, including deaf people. Studies have found that deaf individuals have higher rates of psychiatric disorder than those who are hearing, while at the same time encountering difficulties in accessing mental health services. These factors might increase the risk of suicide. However, the burden of suicidal behavior in deaf people is currently unknown.

Deaf people are more vulnerable to depression and suicidal tendencies because:

I always love being with deaf people. I have no deaf relatives. But I have grown to love them for nearly 30 years. They are fun to be with and they basically “enjoy life”. But deaf people are primarily human beings who react from negative situations and emotions. They are more vulnerable to stress, mood swings and misery because of limited interaction with other people.

Sadly, as far as I know, there is no existing “Depression Helpline” in the Philippines that focuses on deaf people. The reason for this probably as enumerated above, is the lack of trained counselors/medical personnel who can sign fluently and understand deaf culture.

If you know of any deaf person who is experiencing depression, try to…

Doing this may save his/her precious life.

3 thoughts on “On Deafness and Depression, [Deaf Youth Commits Suicide]”