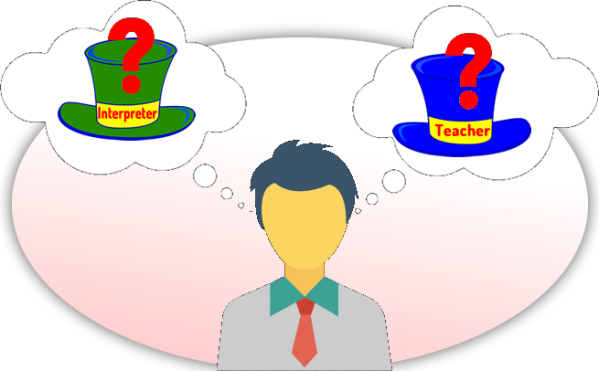 If you are a sign language interpreter in the Philippines, there is almost 100% chance that you are also a teacher for the deaf. Although there is a significant upsurge of interpreters due to an increasing number of institutions that teaches sign language lessons, still, the most readily available place to seek their services are in schools for the deaf even though only quite a handful of them is experienced and qualified.

With these conditions, situations may arise wherein you are compelled to wear either a teacher’s hat or an interpreter’s hat. It is certainly not at the same time. But what if you are in a situation where you want to wear both hats or even switch hats in midstream? 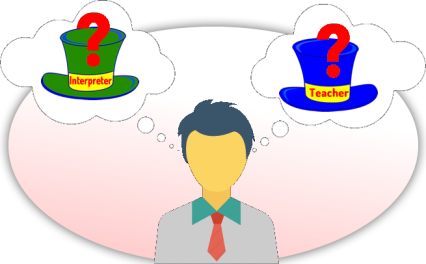 A month ago, one of our former deaf teachers in MCCID messaged me requesting for an emergency interpreting for our former deaf student. To protect his privacy and for ethical concerns, I will try not to mention anything that might reveal his identity.

Our teacher explained to me that the student’s mother died a few days earlier and is on the funeral wake. His father died a few years ago due to complications from alcohol abuse. Since the deaf is an only child, his aunt together with his uncle were the ones who took care of the funeral preparations. The aunt and uncle are siblings of his mom. They are also doing the legwork in processing their sister’s benefits and claims. His uncle and his family started living in their house when his father died. The deaf needs to know what is the cause of her mother’s abrupt demise and more importantly, what will happen to his future. Since no one in his family knows sign language, he is at a quandary. He needs someone to interpret for him clearly what was going on. So he requested for my service.

In our school, we conduct personal home visits to the families of our deaf students. As my former student, I am familiar with the situation of his family. When I went to the funeral the next day, I was greeted by his aunt and some of his relatives. She was very happy that I came and very relieved that finally, she can explain to her nephew about his situation through a sign language interpreter. With this, I safely wore my interpreter’s hat.

Now here is what I gathered. The deaf’s mother was a public school teacher for nearly three decades. So she is entitled to many benefits like pension, burial, funeral, etc. Aside from that, her co-teachers and school staff raised up a substantial amount of money as their contribution to the family. Her former students also collected money as a donation. She was a Philhealth member and has health insurance so her hospital bills were all taken care of. But what is highly significant is that her mother owns a sizeable parcel of land within the center of a highly urbanized part of Metro Manila where they have been residing since the deaf was still in his grade school.

The deaf confided in me that he was very much suspicious about what was going on. In fact, his friend messaged him through FB cautioning him about what his relatives might do with the property and money. He then suggested that the deaf consults a lawyer about it. What’s weird is that when the deaf showed the message to his uncle, he immediately took his smartphone away from him, scolded him while telling him not to believe whoever is advising him. I sensed that his relatives want to keep him in the dark.

At first, his aunt wanted to talk to me alone to inform me about the entire situation and requested me just to relay everything to the deaf. I refused. I want the deaf to be present when both her aunt and uncle explain everything. I told her that I was only called there as her nephew’s interpreter and they need to talk directly to him. They were adamant. So I started to talk loudly voicing what the deaf wanted in order for other funeral visitors to hear. Because of that, they had no other choice but to accept the deaf’s demand. We then started our lengthy interpreting session.

I don’t claim that I have vast knowledge about family code and jurisprudence. But with this situation, I believe that it is the child who should be the main beneficiary regardless of his disability. Upon further inquiry, I found out that the mother did not leave any last will and testament. But still, it does not negate his rights as the sole inheritor. Why are they not telling everything straight to the one and only heir of the family? I felt that they were trying to hide something from him.

I was very much egging to switch hats because I really felt that he was being taken advantage. As a teacher, I have the moral authority to give advice to my former student and remind his relatives about his rights which are guaranteed by the state. Besides, I was not expecting that they will pay me for my services which they actually did not. So technically, I can wear the teacher’s hat. But then, I still restrained myself and went there just to interpret. It’s unfortunate but it’s life. In hindsight, did I do the right thing?

Now, if you were in my situation, which hat will you wear?