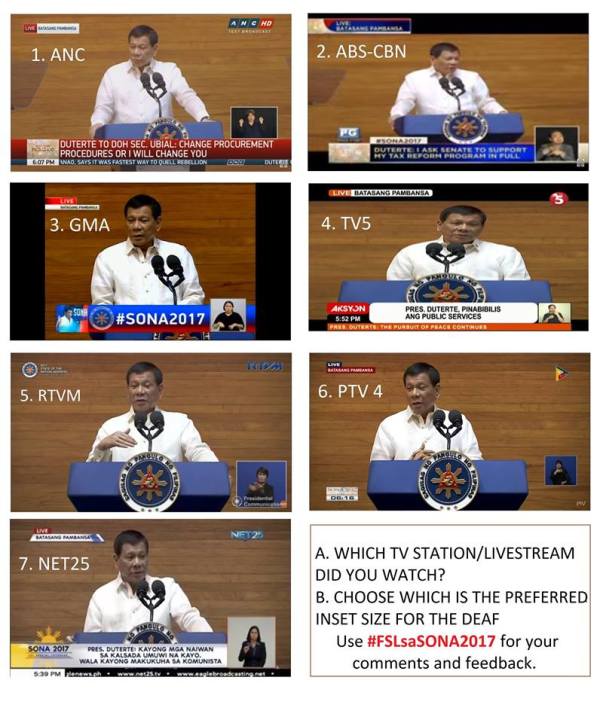 The issue of sign language and the deaf community has sparked renewed attention recently in the Philippines. This was after viewing the second State of the Nation Address of our very controversial and unorthodox (talk about all the badmouth words) yet very popular President Rodrigo Duterte last Monday, July 24.

I was assigned by PNASLI, the national association of sign language interpreters, to do interpreting together with Dean of College of St. Benilde and my “kumare” Nicky Templo-Perez at GMA-7, a regular or “suki”. Actually, it was in GMA7 where I first interpreted in SONA way back in 2010. This year, aside from the local private TV stations, it’s the first time the government TV Channel 4 aired the SONA with inset sign language interpreting. And they were very fortunate to have their interpreting right inside the halls of the House of Representatives itself where the actual action is happening.

However, they did not get their interpreters from the pool of PNASLI people. Instead, they got the services of the Philippine Registry of Interpreters for the Deaf (PRID), the oldest existing organization that trains and deploys interpreters in the country. As an alumnus and a proud product of PRID, I was truly excited that they have participated in such a momentous event. Interpreting in one setting is what I really dreamed of. I have been aspiring that all TV stations will broadcast the President’s SONA using one interpreter.

But I won’t be dwelling much on that. I would like to emphasize on the recent news coming from Senator Bam Aquino pushing for the Filipino Sign Language Bill in the Senate. He said he was grateful for the sign language interpreters during the SONA because of their efforts to deliver the message of the President to our fellow Filipinos who are deaf. Aquino is the author of Senate Bill No. 966 or the Filipino Sign Language Act, which seeks to declare FSL as the national sign language of the Filipino Deaf and “the official language of the Philippine government in all transactions with the Deaf.” He also mentioned that many saluted or lauded the interpreters for making the sign language available to deaf persons during the two-hour SONA.

It was a really welcoming news item. But then, a handful of people who commented on the news in social media were so distasteful and exposing their ignorance about sign language and its use. Someone even suggested that the Senator should focus his efforts on how he can assist the deaf by putting more wheelchair ramps! Talk about mixed disabilities. Still another guy recommended that the Filipino deaf use the internationally accepted American Sign Language (ASL) so that he can compete globally. Really? Why would the Filipino Deaf need that? Are they applying as Call Center Operators or work overseas? Yet another one opines that supporting FSL is for the sake of Filipino pride and acknowledgment of its existence. Well, what’s wrong with that? He even emphasized that sign language is universal so there’s no need to create a new one. Does he have a concrete basis sign language is universal?

Did you know that Filipinos have different names describing rice, our staple food? We have palay for unmilled rice, bigas for milled rice, kanin for cooked rice, lugaw for rice porridge, tutong for burned rice, bahaw for leftover rice and sinangag for fried rice. You might also be surprised that each of these words has a distinct Filipino Sign Language.

Another distinct difference between ASL and FSL is through fingerspelling. Look at the illustration below.

I have met people who brag by saying they are well versed in ASL. But when I observed their signs, I can easily distinguish it from Signed Exact English (SEE) or Pidgin Sign English (PSE). So it’s either they don’t know what they’re talking about or they are plain ignorant. (Is there a difference?) 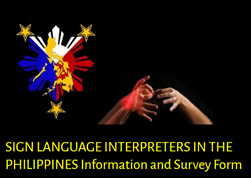 To all my Filipino sign language interpreters, may I encourage you to answer this Interpreting survey form? This survey is being conducted by the Philippine National Association of Sign Language Interpreters (PNASLI). The group would like to get in touch with with all its members soon for the next General Assembly meeting.

You may click on the image above or this link to go the the form. Thank you. 😉

This article really touched my heart. Not because I personally experienced this, but because in spite of the difficulties and almost thankless job of giving voice to the deaf, we are still here serving them.

It’s really hard to interpret for the deaf here in the Philippines! The process of converting spoken words into signs that the deaf can digest requires a highly technical person with superhuman ability because you need to do everything in split second. But then most of the people out there from the parents of the deaf up to our government would even like to make our services free of charge all because of charity. Try doing what we are doing and see if your brains will get blown out.  Thank you very much to JP, my idol from the south, for exposing the plight of these unsung heroes, most especially my closest friends Liza Presnillo and Ma’am Liway Caldito.

Here is the article from Rappler which I copy-pasted here from the original site.

Sign language interpreting is a back-breaking job, but is also one of the most noble professions in the world. Without interpreters, deaf persons would be disenfranchised.

BRIDGING THE GAP. The late Liza Presnillo in one of her many sign language interpretation engagements for TV.

She was one of the founding board members of the Philippine National Association of Sign Language Interpreters (PNASLI). She also pioneered the news inset sign language interpretation in Philippine television, as a news interpreter for TV5 since 2011. Her accurate and clear elucidation of information, including even the sarcasm and animated reporting of the Tulfo brothers, has gained her the respect of the Filipino audience.

Before her TV stint, she first became an icon in attending to the accessibility needs of the Filipino deaf community. She served as an interpreter in the academe, social events, national, and international conferences. She also helped individuals get through employment opportunities, medical and legal services.

Presnillo mentored a lot of aspiring signers and junior interpreters by molding them to become exceptional advocates for the rights of deaf persons. She also spearheaded a campaign for the rights and recognition of Filipino sign language interpreters.

She did all these despite her failing health.

In spite her dedication and undying sacrifice for the deaf community, she struggled financially and received no support from the government during her fight against breast cancer.

Meanwhile, another advocate, had the same fate. Liwanag Caldito has been a teacher for deaf kids in Pasay for nearly 30 years, and yet, she was easily dismissed from work with only a small retirement benefit.

Her dismissal came after developing Parkinson’s disease. This, after a robbing incident while on board a bus on her way to school.

After losing work, she ran her own non-governmental organization in 2007.

Unfortunately, just a few months ago, she learned she has to undergo an operation for complications in her spinal disc. Caldito had to raise funds because the operation was too expensive.

She received no government support. All the help she got came from family and friends who rendered their services pro-bono.

These are just some painful misfortunes that sign language interpreters have experienced here in the Philippines. They also suffer from prolonged standing, carpal tunnel disorder, varicose veins, back and spinal cord injuries, among other degenerative health disorders caused by stress.

Many of them do not get paid at all times because they are stereotyped as volunteers or charity workers.

In courtrooms, sign language interpreters play a critical role in extracting precise information, especially whenever they handle cases involving abused deaf persons. At times, they may fall prey to death threats from abusers and syndicates. Some don’t receive security measures from the court or police, hence end up protecting themselves. Others are left with no choice but to withdraw from the case.

The most frustrating part is when they end up scrutinized by the court itself. This still happens even if the Supreme Court already issued a memo in 2004, saying that court administrators should approve requests of lower courts for the hiring of sign language interpreters. Contracted interpreters should be paid at least P500 to P1,000 per hour, including transportation and meals expenses per appearance.

People and institutions that benefit from sign language interpreters should ensure that the likes of Presnillo and Caldito are well taken care of.

They should be provided with work benefits like medical and hazard insurance, secured employment, and ample time to rest in between interpretations.

Those who benefit from their services should take the lead in advocating and institutionalizing the rights of interpreters.

Sign language interpreting is a back-breaking job, but is also one of the most noble professions in the world. Without interpreters, deaf persons would be disenfranchised.

Interpreters are known to sharpen their skills well because they are aware of the growing demand of this profession. There are only less than a hundred enlisted professional interpreters in the Philippines.

Unless the Philippine government implements policies and programs that truly recognize the critical role of interpreters by passing the Filipino Sign Language Act, the daily oppression and discrimination of interpreters will continue.

Unless the Filipino deaf leaders, advocates, and other stakeholders take stronger action on this issue, the Philippines will continuously lose modern-day heroes like Presnillo. – Rappler.com

Here is a link on the interview in Filipino langauge of Luchi Cruz-Valdes to Dr. Liza Martinez of Philippine Deaf Resource Center and Rowena Rivera, Deaf Officer of Support and Empower Abused Deaf Children (SEADC) about the importance of right sign language interpreting. This is in connection with the interpreting fiasco during the funeral of South African Leader Nelson Mandela. 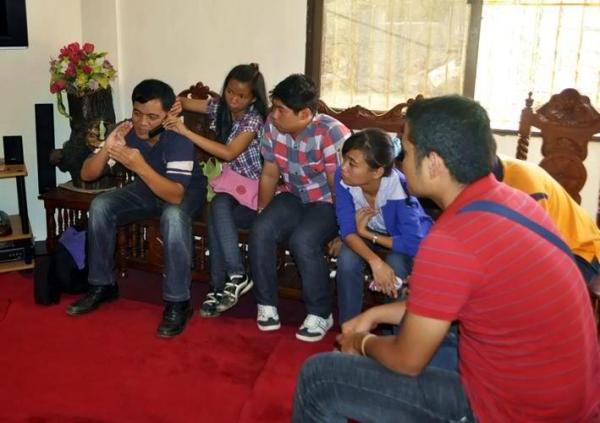 One of my deaf students tagged me in her Facebook photo. In one of our House Visits wherein we interview the families of our deaf students in the comfort of their homes, a hearing parent who works in Dubai requested me to interpret her message appealing to her daughter to focus more on her studies. Since I cannot sign while holding the phone, one of my students volunteered to hold it for me. Cool! 🙂