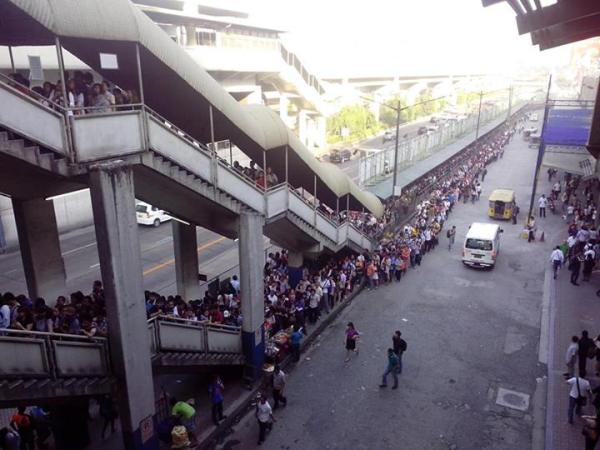 A little over a week ago, I was invited together with one of the deaf trainors of our college for the deaf and my deaf idol Moises Libot, by the HR Personnel of the Manila Light Rail Transit Corporation (MRT) as one of their resource speakers. We lectured about the needs and concerns of deaf and hard-of-hearing people in accessing the mass transport system, specifically, using the MRT system.

This awareness project was part of the series of Sensitivity Seminar for Persons With Disabilities conducted by the National Council on Disability Affairs (NCDA) in partnership with other disabled peoples organization. Aside from me and Moises, other teams were assigned to speak about the needs of those with visual impairments, psycho-social disabilities and mobility impairments. So far this year, we already conducted these seminars in various government agencies like the Department of Trade and Industry, Technical Education and Skills Development Authority and the Department of Science and Technology. We also had these trainings in private firms such as Cebu Pacific Airlines and HSBC.

At first, I did not want to participate because I don’t want to add more tomatoes thrown on the faces of those who manage this part-government part-private company due to their sheer inefficiency and blatant incompetence. Aside from that, deaf and HOH don’t have any mobility issues. They just want to be left alone and free to travel wherever they go.

But then, I believe that it’s about time for the government to be aware that among those with physical disabilities, it is the deaf and hard-of-hearing people who use these mass transport system very often. They also fall in line to buy tickets, brave the harsh weather and sea of people in order to commute from home to work. And they are the group of people who do not need any major physical modifications in the system in order to access the service. And since they are one of those who suffer together with the rest of the commuting public, the management might perceive them as “one of those that can be ignored.”

The seminar was held in three batches. I had a prior commitment on the first day so I joined in the last two batches. The audience were a mix of HR Personnel, front-end service personnel like ticketing officials, crowd control and security personnel.

First I explained to them about the nature of deaf people by giving them a quick guess on who they believe are persons who cannot hear from the photo I showed to them. As expected, majority of them made wild guesses which made them realize that deafness is a hidden disability. They cannot just pinpoint a deaf person from a crowd, unless, they made sign language gestures or show their PWD IDs.

I then explained to them about what-not-to-do in dealing with deaf people. I also gave them the politically correct terms in addressing the person and the community. And finally, the one they are excited about, we taught them about fingerspelling using Filipino Sign Language as well as a few polite expressions.

I enumerated to them about the problems deaf people encounter in riding the MRT. These are:

In the Philippines, Persons With Disabilities, pregnant women, children accompanied by their parents and senior citizens are given priority seats in these mass transport systems. So the deaf people are allowed to use the first train cabin reserved for these groups. However, they are usually not given priority in falling in line since, as one of the problems I mentioned, security personnel are having difficulty knowing deaf people from among the sea of commuters.

However, based on their reaction and comments, the rest of the problems can be solved and categorized as a “reasonable accommodation”. They promised that they would look into it by giving recommendations to the proper decision makers. Let’s just keep our fingers crossed that they would do what they promised.

In behalf of MCCID and the deaf community, we are truly grateful to Metro Rail Transport Corporation for conducting this worthwhile activity. 🙂