is centered not just on skills but on the core fundamentals of being a sign language interpreter.

The event will be held on September 23-25, via Facebook Group  and September 26 via ZOOM. It will happen right at the comfort of your own homes. It is timely also that during this time we also celebrate the International Week of the Deaf.

Topics to be presented in the 4-day e-conference together with their respective facilitators are as follows,

Although the e-conference is a paid event, you may click HERE to join for the FREE PASS via Facebook Group and via Zoom only on September 26. However, Here is the Rise Up Plan for the investment fee.

You may send your investment fee through these options:

OPTION 1: BANK
Deposit the amount to:

REGISTER ON THIS EVENT BY CLICKING ON THIS LINK => https://docs.google.com/forms/d/e/1FAIpQLSda5Wqex1eXMp9nDOpl4v6q2cT9N66BrT3Biwv0jUZSdV1fYA/viewform

To know more about the event and other details, please go to their official website at

At a time when we are being QUARANTINED,
you’re a hero for choosing to RISE UP!

Glottolog, a comprehensive reference information for the world’s languages, especially the lesser known languages, listed the language used by the Filipino Deaf as Philippine Sign Language.

Also, SIL International, (formerly Summer Institute of Linguistics) lists the language as Philippine Sign Language. They even made an identifier code of ISO 639-3. These recognitions further strengthen the legitimacy of PSL as the right name.

In 2006, I became one of the editors of Wikipedia, the world’s largest free online encyclopedia. Using Jomanila as my editor name, I was able to create a few notable articles. One of which is “Filipino Sign Language” which I posted in February 15, 2008.

However in 2012, a certain tyrant and “feeling god” editor/dictator named Kwamikagami vandalized the article name by changing it into PHILIPPINE SIGN LANGUAGE. 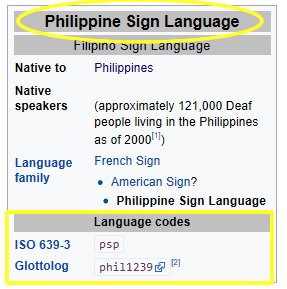 I humbly asked why the sudden change and explained my side. But he still defended his action simply because he is a “demigod” and he does not care for others’ truth. Because I cannot challenge his abusive “powers”, I just let him be. You may view our heated exchanges here.

Both Glottolog and SIL were used as bases for the Wikipedia article change from FSL to PSL. These supporting sites further strengthen the Wikipedia tyrant’s decision to change the name of the article. So the name got stuck for nearly five years. Minor edits and information were added but the name PSL stayed, until the law was passed. I added the information about the FSL Law in November 2018. Thankfully last December, a Filipino Wikipedia Editor named HaribonEagle927 moved the page to Filipino Sign Language after pointing it out in my talk.

Still, many senior Filipino deaf insist that PSL is the right term because this is what they were accustomed to. Some even invented the name PINOY Sign Language as a better term and created their own Facebook group in 2014 to support this. The group currently has 240 members.

That is why Aldrin Gabriel, a well-respected deaf video blogger and one of the founders/administrators of Filipino Deaf Vloggers: Feed, Awareness and Openness Facebook Group (FDVFAOG) decided to post his explanation about the issue. Aldrin, an alumnus of MCCID, happens to be one of my very best deaf students. He is a very creative artist, a local champion and Philippine representative in the International Skills Competition held in Japan in 2007 and the only Filipino Deaf actor who interpreted the “Mi Ultimo Adios” poem of National Hero Dr. Jose Rizal in Filipino Sign Language. 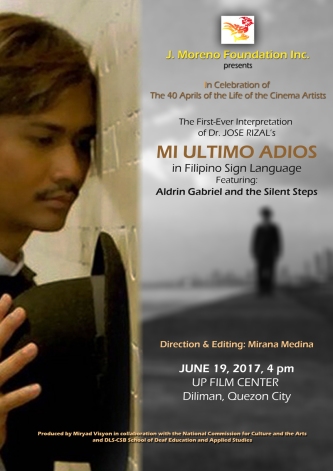 FDVDAO Group is a closed invite-only Facebook group which now has nearly 4,000 members, majority of whom are deaf and hard-of-hearing. You can only post video blogs in sign language. Personal opinions and views of all the members is highly respected so bashing is not allowed. I was honored to be invited in this group.

You may view his ten-minute video in Filipino Sign Language by clicking on the YouTube link below. Aldrin’s explanation is very simple and straightforward. He even used a paper diagram to illustrate his point clearly. I added the English caption/subtitle for the benefit of those who are unfamiliar with the language. I am sure you will now be convinced that FSL is the correct name after viewing his video.

Cheers to Filipino Sign Language and the Filipino Deaf Community!!!

Note: He corrected the word AMERICA in his paper illustration to AMERICAN. Sorry for the error.

Free photography workshop for the deaf to be mentored by famous deaf wedding photographer and International Skills Competition Photography Champ Dennis Rhoneil Corpuz Balan!!! This will be held at Fort Santiago on Sunday, April 22 and sponsored by Federation of Philippine Photographers Foundation (FPPF). You may contact them through the poster below. Grab this now!!! 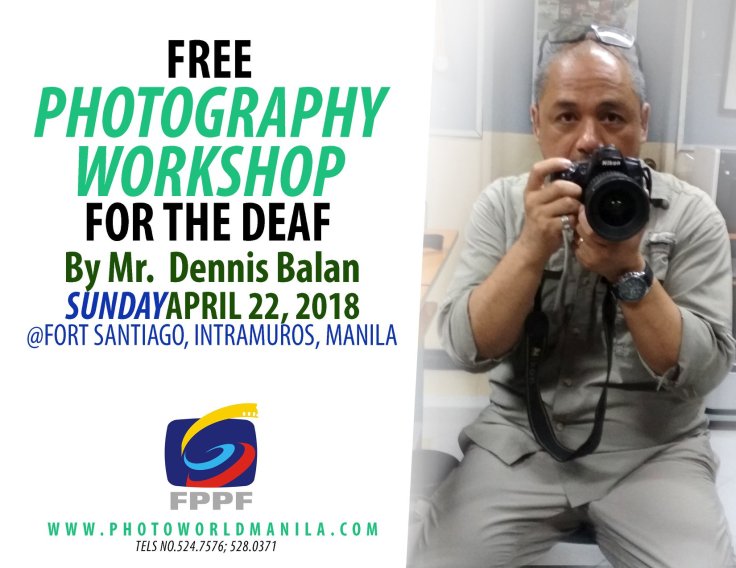 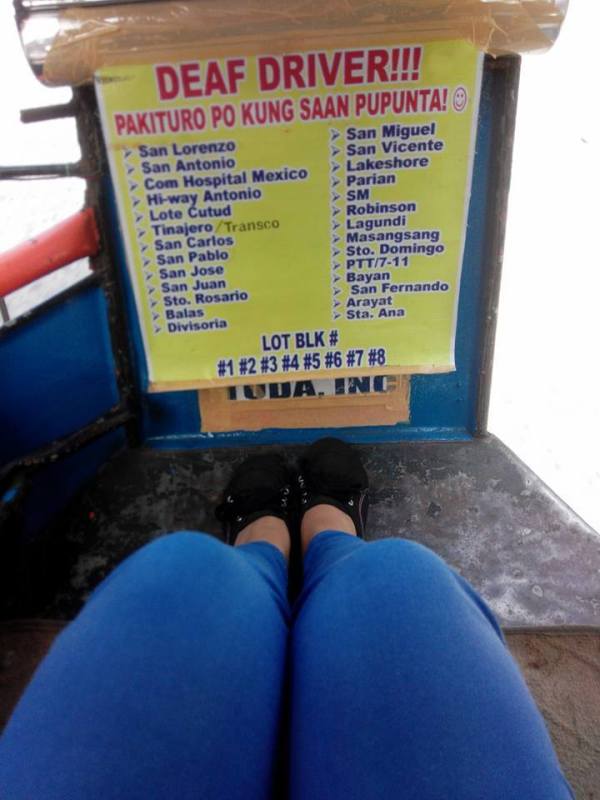 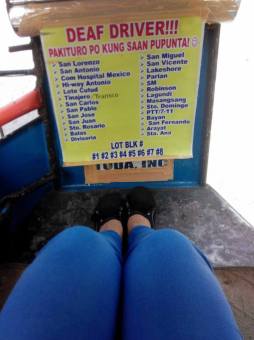 Empowering! This photo of a tricycle driven by a deaf man in Mexico, Pampanga is currently making rounds in social media. It already has more than 10,000 likes and nearly 2,500 shares in Facebook courtesy of Philippine Star as of this writing. Passengers can point to the location where he/she wants to drop off.

“Having such condition, he still works for his family. Such an inspiring person,” says Alyoza Malig Bondoc, the woman who posted the photo on Facebook.

I just wish they also posted the name of the deaf. Nevertheless, he’s truly amazing! 🙂

Good news to all our Filipino Deaf friends out there. The very elusive board examination for teachers has been conquered by a lady! Her name is Mary Catherine Dela Torre. Most of the deaf after graduating from a bachelors degree in education, will land as teacher aide without any assurance of becoming a regular teacher, unless they pass the licensure exam. Now, it can be done!

I’m not saying that she is the first board exam passer. I know of two persons who successfully made it in the past. But one unique thing about Mary Catherine is that she came from a regular college in Iloilo City (Central Philippine University) without the aid of an interpreter although she comfortably communicates in sign language. Also, she broke the tremendous odds by enrolling in a good review school which had helped her a lot. But the best part of it all is the all out support of her loving mother which was always there helping her through her lessons and examinations.

Mary Catherine, thank you very much for inspiring other deaf that they too can pass the test. This blogger salutes you! 🙂

* – This Abs-Cbn breaking news video is in Filipino language without an English subtitle.